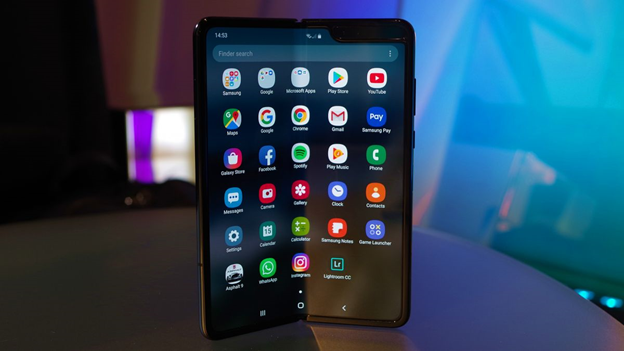 However, it’s been just few weeks the fold able has officially gone for sale by Samsung. Previously, people were only speculating about the phone’s screen thickness and its crease as it was only on stages and not officially for sale.

Now, the first impressions of phone which we are getting from most of the people are positive. The Samsung Galaxy fold able phones is perfect for the multi-tasking, but the design is not perfect but since it is the very first fold able phone of Samsung Galaxy, it seems to be much promising.

All about the Samsung Galaxy Foldable Screen

The most exciting thing in the fold able phone are their screens. The Samsung Galaxy fold able is a trio of screens. The small screen is made up of thick bezels and is 4.6 inches Super AMOLED screen with 1,960 x 840 resolution. When folded this screen gives the phone a look of vintage phone. The medium screen appears when you open a fold and it becomes like a book. What steals the show is the 7.3 inches Dynamic AMOLED screen with QXGA. This screen is super fascinating and Samsung calls it Infinity Flex display. The screen is made up of bonded polymer layers. The company had released so many videos that how these fold able screens can easily undergo stress and how well these fold able screen works. This shows that this dual-axis design is definitely not going to disappoint you.

There’s only a camera behind the phone, and the side with the hinge is free of buttons. The hinge additionally hides away when you open up the phone. It’s on the different edge that you’ll find the power and volume buttons. There is no fingerprint scanner like the one in the Galaxy S10e. When the Bix by button is pressed it will call up Samsung’s virtual assistant.

Instead of the finger print sensor there is a face unlock you can use to free up the screen as an alternative, however it is not that secure like Apple’s Face ID. Shockingly, it also do not have headphone jacks, so be ready for the Samsung’s wireless buds.The fold able phone is also not water resistant. The screen is so nice and has fine glare, but there is a visible crease when the screen is folded. Also, the thickness of the phone when folded is definitely a matter of concern.

Software and How well does it work?

The software used is the Samsung’s new One UI software running Android 9.0 Pie. That is not too different than other Samsung phones, but there is a difference in working of the apps. The mobile app development and Android app development teams will have to make apps accordingly now because the notifications can be quickly responded when the phone is folded but for the other things on app you need to unfold the phone.

For the iOS app development they do not need to worry, as Apple has announced they are not going to launch any kind of fold able phone in the near future. Although,Samsung integrated with Google for the feature called App Continuity which automatically makes apps work on the 7.3 inch screen when unfolded from 4.6 inch screen. For ultimate experience, the edge panel is transformed into a new floating window for the multi-tasking mode.

You can add up to three apps but we believe it will be very difficult to utilize three apps at once, as they will crush. We recommend to use two apps at a time, like you are using two phones at a time. Also, not every kind of apps can work well in this mode. As per Samsung, their own developed apps, WhatsApp, Microsoft apps, apps by Google, and Amazon Prime Video will work well. Although, it is expected that more apps will be added.

As it is powered by Qual comm Snapdragon processor, just like other Samsung S10 phones, which is the flagship choice for Samsung. It contains 12 GB RAM and has a fair internal storage of 512 GB. You cannot expand storage as there is no Micro SD slot given. Although,given the ram is 12 GB, and the phone allows three apps we think that the phone may struggle with this RAM and would not perform as better as S10.

The phone has a large 4380 mAH battery along with two separate batteries in each side of the Fold.Although, it is not yet clear how long this battery works as compare to S10 which has 4100 mAH battery which lasts long full day we hope the fold able phone battery also has good durability.

These days the good phone is all about a good camera. Surprisingly, the Samsung Galaxy Fold able phone comes with six cameras. It has a 10-megapixel lens on the front, and a 10-mega pixellens paired with an 8-megapixel 3D depth sensor which shows when the display is unfolded, and on the rear it contains a 16-megapixel ultra-wide lens,12-megapixel widespread lens, and 12-megapixel telephoto lens. It’s the greater 10-megapixel lens that is the biggest distinction between the Fold’s cameras and the S10 Plus’ setup. Comparing the camera to Huawei p30 Pro, the shots taken in the low lights are not as good and the Google Pixel camera is more good.

The official selling price of the Samsung Galaxy Fold able phone is $1980 including the internal storage of 512 GB. Right now it is just available at T-Mobile and AT&T network. It is available in four colors, silver, green, black, and blue. The 5G model will be released in some countries outside U.S, but the prices are not confirmed yet.

But what about the Competition?

The Samsung Galaxy fold able phone is definitely a ground breaking phone, and there is a lot of excitement that will be witnessed in the smartphones industry after this. But, the prices and availability remains the issue, because till the technology do not become affordable it will not be in reach for many people in the world.